Visiting London this year my mission was clear: to find some street art in the city. Looking for it I came across the Amy Street Art Trail which was initiated by the Jewish Museum. Within the trail several artists showed their picture of Amy Winehouse. One of them caught my attention in particular: the Chilean artist Otto Schade – Osch. So, I was very happy when he agreed to answer me some questions. Although his name sounds quite German, Otto Schade has no obvious roots in Germany. He was born 1971 in Chile where he grew up and stayed until he finished university with a degree in architecture. Before he came to London, he had been living in Berlin for two years. Since 2006 he is living in Shoreditch in East London where many of his works can be found.

In his street art, which is influenced by abstract art and surrealism, he uses mainly two styles: the orb style as his anti-war theme and a style he calls the „ribbon style“. The ribbon style is his trade mark and proves all the knowledge he gained from his architectual background. He makes sketches before he goes out to the streets. His tag is „Osch“. For spraying it he uses a template. He has been part of several street art festivals and his art is exhibited all over the globe, for example in the US, Kenya, Japan, China and all over Europa. How comes you became part of the Amy Street Art Trail? What is your connection to Amy Winehouse?

I was contacted to be part of it. I really like some of Amy’s songs. She was an East Londoner, so I feel in part represented by her after living in East London for 11 years already.

For how long have you been a street artist?

Why did you choose street art as a form of art?

Once I lost my job as an architect for the crisis in 2009, I met a Chilean street artist friend who suggested me to go to paint on the streets as he thought my work was good enough and at the same time I was living in Shoreditch where there is loads of street art.

I also tried to show my work in some galleries in London between 2006 and 2009, but it was not easy as most of the galleries hire the spaces.

What is special about London’s street art?

Maybe because London is one of the most important capitals in Europe (till Brexit), so loads of street artists come from abroad to paint here in East London. Also the police officers here are a lot more open-minded than in some other countries. If they catch you doing proper art then they don’t bother you. All depends, to be honest.

How do you feel about your pieces of street art being painted over or destroyed otherwise?

To be honest, you can say that the fact that street art is always changing, I understand it, but sometimes really amazing street art pieces have being painted over and covered by not better (worse) ones. I think, there are still problems and I think every council should get involved to coordinate to keep the good quality pieces longer or just spend the time to find new spots to improve the city within the years on relation to the art on the city. California is one of the cities that lately have been trying to protect the good pieces done in the city, to me that makes sense.

How is the street art community in London?

The street art community in London is a bit apathetic. I haven’t painted many collaboration pieces, just with a few artists.

I didn’t join any group at the beginning to be honest. I got some problems with artists because of some spots I painted when I started, so I decided to find my own spots. I don’t want problems with any other artist about that.

I got good street artist friends here in UK and abroad.

How do you chose the places where you put you street art?

As I got an architect background I normally choose the spots that got good footprint, or at the end of a street maybe there is a nice spot looking at me, tempting me to paint it.

It’s a first dialogue between the wall and the artist. The seduction from the spot, inviting you to paint it.

In case of illegal spots it’s a matter to check if there are some CCTV cameras. 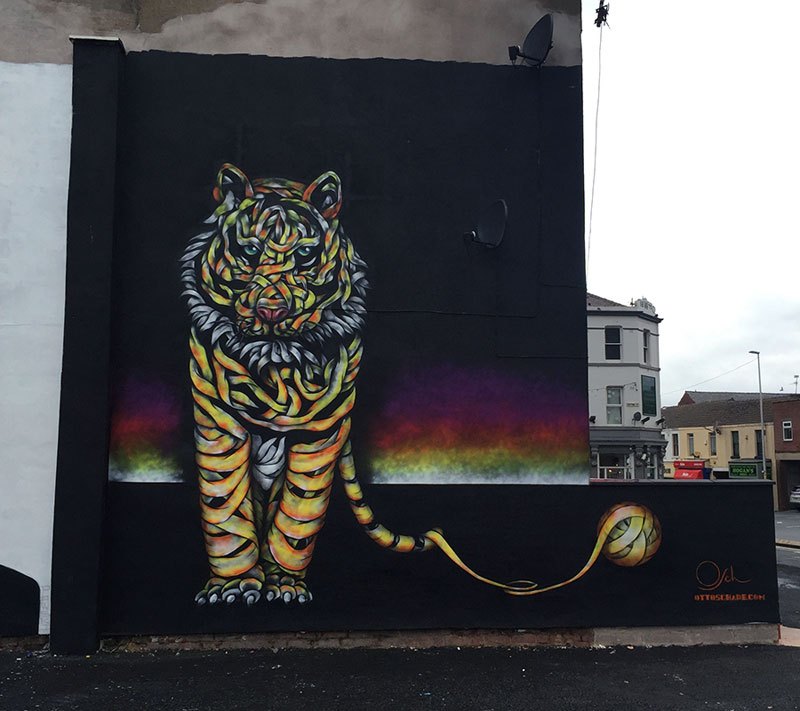 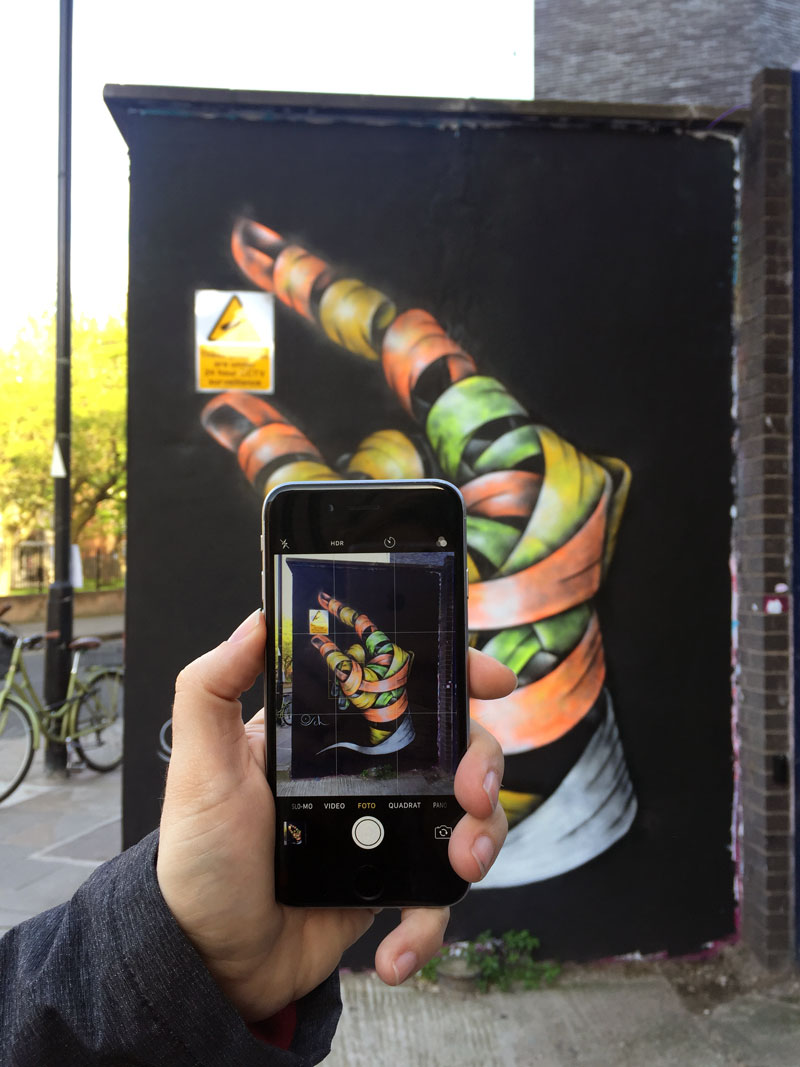 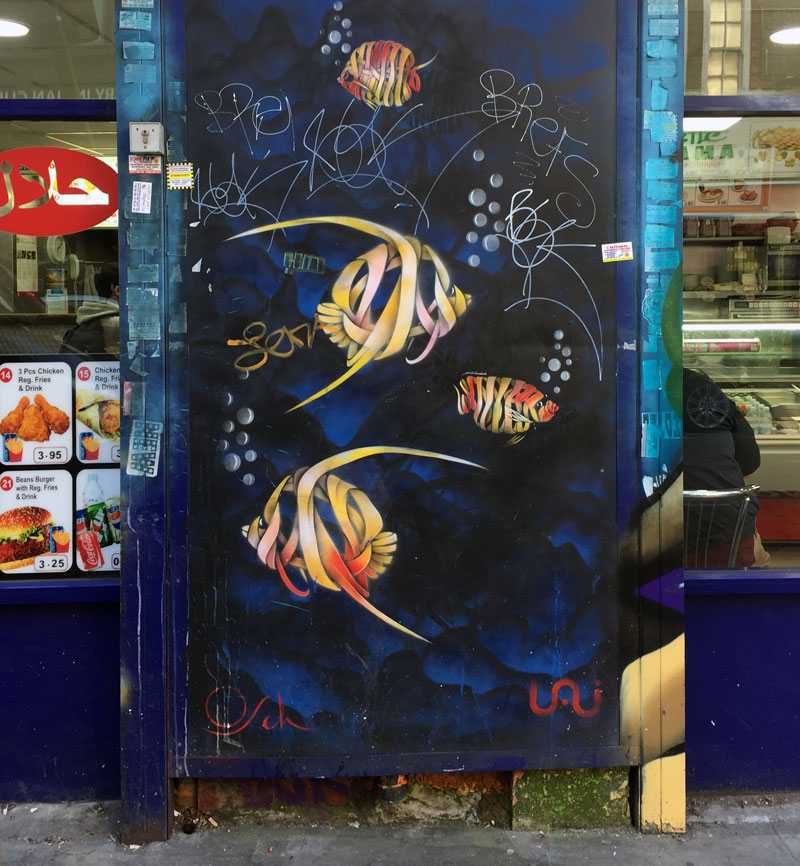 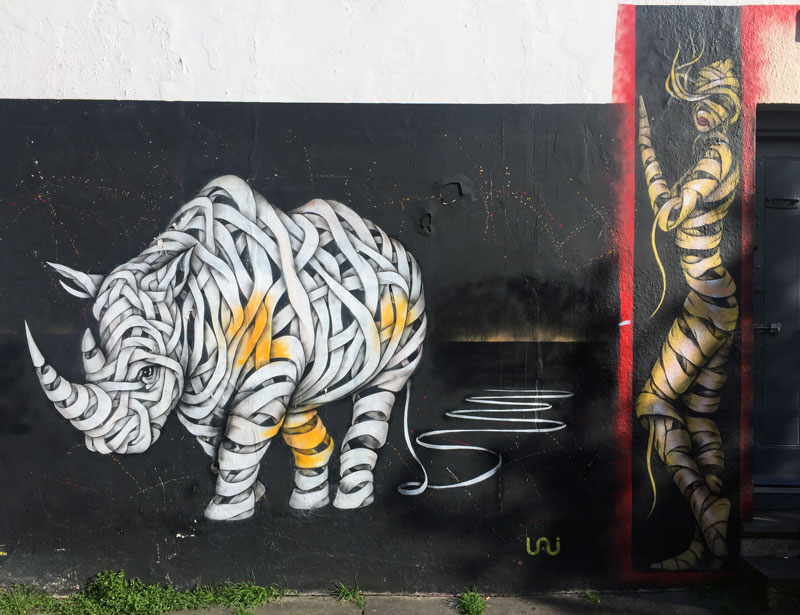 By the way, you can find another → Interview with Otto Schade at Simone from Totally London in her series „Meet the Londoner“.

I also met a street artist in Valencia. This time a sculptor. You can read what he thinks about the Spanish street art scene in the → Interview with Rodrigo Romero Pérez.

* Affiliate links: If you order one of the articles or book a hotel via the links marked in this way, you are supporting our blog Weltreize and we get a few cents commission. Don’t worry, we don’t see who orders what. Regardless of this, we only recommend articles or hotels that we ourselves are convinced of and that we use ourselves. It won’t cost you a cent more.
Claudia2022-02-05T20:21:14+01:00Tags: Amy Winehouse, AmyStreetArt, Hauptstädte, Interview, London, Osch, Otto Schade, Rhino, Ribbon Style, Städte, Street Artist, Streetart, Tiger| 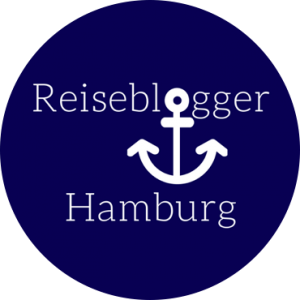 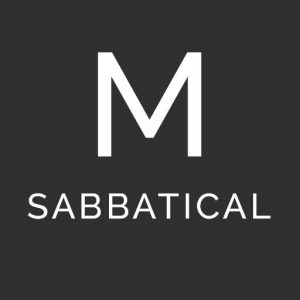